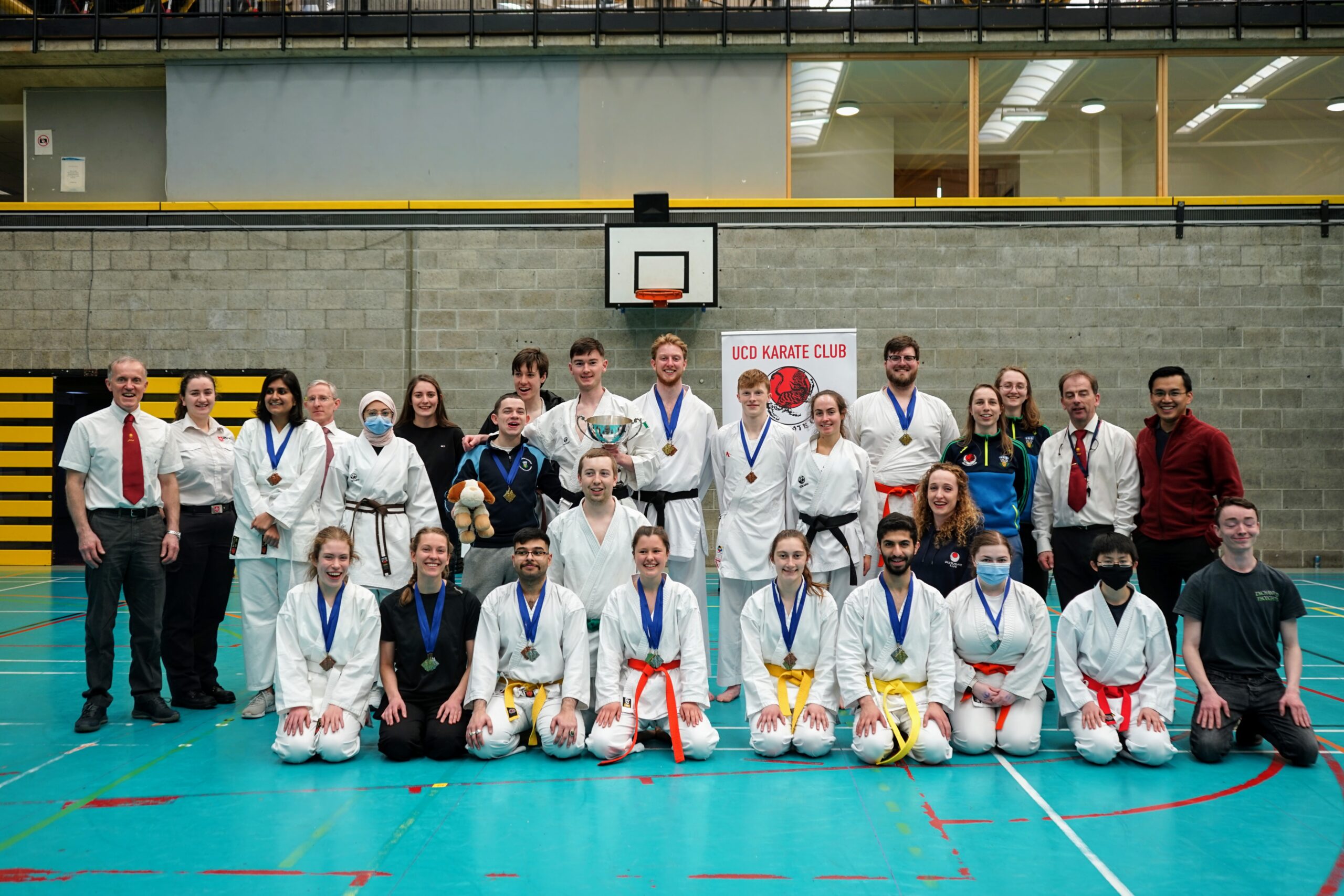 On the 2nd of April the UCD Karate Club stormed to victory at the first All Ireland Karate Intervarsities to take place in three years.

View all photos from the event

The hosts started off strong in the Junior categories with a slew of medals.

Yu-Chen Lee took gold in the Individual Junior Men’s Kata and bronze in the Kumite, while the Junior Women’s Category was a clean sweep for UCD, with UCD taking 1st, 2nd and 3rd in both categories. Heather Willow taking Kata gold, Faith Molloy wining Kata silver and Kumite gold, Cría Dowling taking Kata bronze, while Emma Berglund won Kumite silver and Charu Guggadh took home Bronze. The juniors continued their form in the Team Kata and Kumite events with the UCD trio of Faith, Matt Amenda and Yu-Chen taking first place Team Kata with gold, while Emma earned a silver medal in a mixed UCC/UCD team and Cría teamed up with UL for their hybrid team to take bronze. Matt also took silver in the Junior Team Kumite with a hybrid team while in the Junior Women’s Team Kumite UCD once again topped the scoreboard with Faith, Emma and Cría earning gold while Heather, Karen and Charu took silver.

In the intermediate category there was a notable gap of attendance following on from the impact of Covid on teams.

The Women’s Individual and Team Kumite events did not take place. However, UCD had good form in the Individual Intermediate Women’s Kata with first place gold going to Hao Noda and Aisling O’Connor winning bronze.

In the senior divisions the competition was heated with a large turnout for the open weight national competition in kata and kumite.

In the women’s category Eadaoin Murtagh secured the silver medal for Women’s Senior Individual Kumite after a series of excellently fought bouts, as well as a bronze in Team Kumite and the gold for Team Kata with mixed teams.

In the men’s category UCD won a 1,2,3 victory for Senior Men’s Individual Kumite, with Seán O’Connor, Jack Dorrian, and David Gahan steeling away with gold, silver and bronze. David Gannon took gold in Senior Individual Men’s Kata with a razor sharp performance and Sean O’Connor cemented things in Senior Individual Men’s Kata with the bronze for UCD. In the Team events the UCD men placed first with David Gahan on a mixed team, and second in the kata with the trio of Seán O’Connor, David Gannon and Jack Dorrian. Then Seán O’Connor and Devkaranpal Sohanpal wrapped things up nicely by securing the bronze for UCD in Senior Men’s Team Kumite.

In total UCD took home an incredible medal haul of 17 gold, 18 silver and 11 bronze to secure the title as All Ireland Karate Intervarsity Champions 2022.