Karate in the Olympics 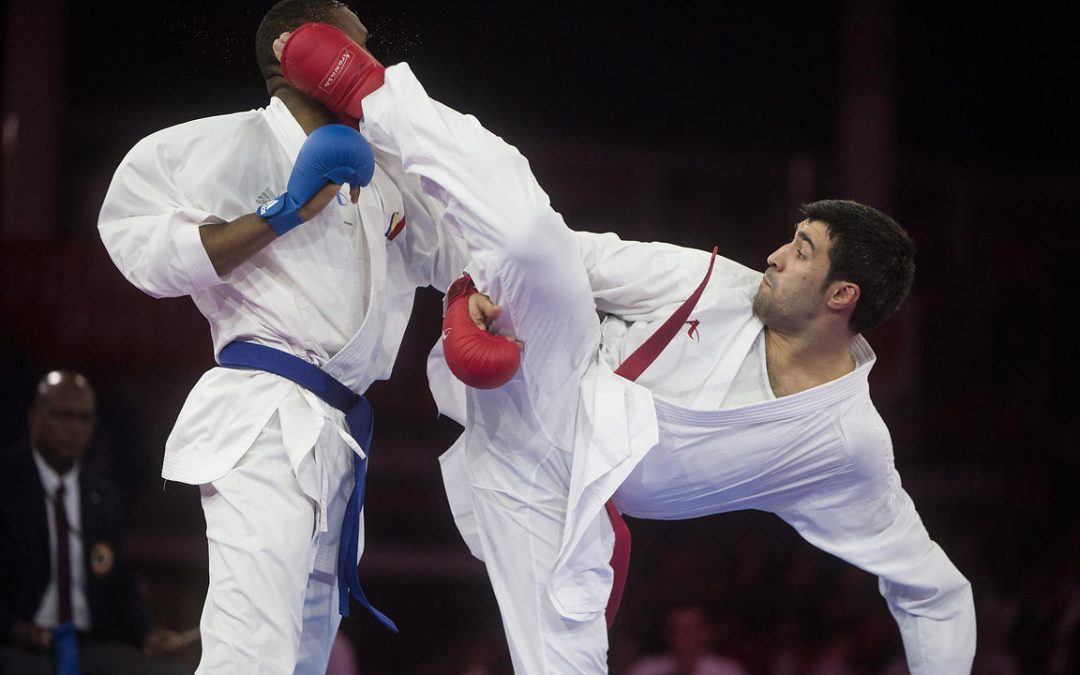 Exactly one year from now, Karate will make its Olympic Games debut for the first time in Tokyo 2020, taking place from 6 to 8 August.

The quest to bring karate to the Olympics has begun since the 70s, but took four decades later to receive the majority vote to become an Olympic sport. Next year, it will be opened in the Nippon Budokan, the spiritual home of Karate in Japan.

We live in exciting times and hopefully this exposure would bring a greater interest to our beautiful martial art.

The following text is published on Olympics.org:

TWELVE MONTHS AFTER THE ANNOUNCEMENT WAS MADE INCLUDING KARATE IN THE PROGRAMME FOR THE TOKYO 2020 OLYMPIC GAMES, TOKEY HILL, THE 1980 KARATE WORLD CHAMPION AND CURRENT COACHING DIRECTOR AT THE USA KARATE FEDERATION, CAN BARELY BELIEVE HIS DREAM HAS COME TRUE.

“Just talking about it makes my skin tingle and the hairs go up at the back on my neck,” said Hill of karate’s debut at the Olympic Games Tokyo 2020. “Every day I wake up to train athletes, I think to myself, ‘it really happened’. It’s unbelievable. Every day it is a blessing to wake up and say, ‘we are actually going to be there’.

“I tell my doctor, ‘Doc do me a favour man, keep me alive for three more years’.”

Getting to this point has, as Hill acknowledges, been “a struggle” with “plenty of ups and down”. Karate has been dancing around the fringes of the Olympic movement for several decades, coming particularly close to securing a spot at the London 2012 Games. “Karate does not know the expression ‘giving up’,” Hill said, with a laugh.

The close calls did give the sport an opportunity to not only ensure its presentation was as clear as possible, but to also spread the sport’s message a little further each time. “Karate shares principles and ideas which have a positive impact on the world,” Hill said. “It instils the character-building blocks of confidence, self-esteem, the ability to deal with peer pressure, avoid drug problems.”

IT INSTILS THE CHARACTER-BUILDING BLOCKS OF CONFIDENCE, SELF-ESTEEM, THE ABILITY TO DEAL WITH PEER PRESSURE

Proponents of the sport, and there are none bigger than Hill, are also adamant that the full body skills on show plus the clear use of hands and feet in scoring points make karate one of the most spectator-friendly of all the martial arts.

The decision to include kata, the demonstrative side of the sport in which each athlete must complete a series of pre-determined movements is, according to Hill, indicative of karate’s self-confidence and maturity.

“Our first world championships was in Tokyo in 1970. To come full circle, Japan not only gets a lot of the credit for the sport but they have done a lot of work revolutionising what we are doing, as far as bringing karate to the forefront,” Hill said.

Not that the Japanese are expected to exert a stranglehold on the medals in three years’ time. Hill has seen, at first-hand, the burgeoning talent worldwide.

“Karate has grown all over the world. From being on the technical committee of the Americas and the WKF I have had a lot of exposure. Karate is no longer in pockets,” the coach of a number of USA athletes hoping to make the team for Tokyo, said.

“Colombia, for instance, had three or four people in recent finals, Brazil have current (world) champions, the USA has Tom Scott, number one in the world at -75kg.”

Add on the significantly increased national investment that will come from governments across the globe as a result of karate’s rise to Olympic status, and Hill is certain that the smaller nations will challenge the traditional powerhouses.

As the USA’s first karate world champion – he won gold in the -80kg category in Madrid, Spain – Hill does have some personal experience of this phenomenon. He is hoping he will soon get to experience it vicariously. Hill’s daughter, Ashley, was recently lured back to karate by the prospect of competing at the 2020 Olympic Games.

“She had a great acting career, she was out of karate for four years but now she has made a commitment to come back because of the Olympics,” Hill explained.

Ashley, a two-time world championship medal winner and multiple USA national champion, had swapped the mat for a successful TV and film career, including a role alongside Arnold Schwarzenegger. Giving it all up to return to the rigour of full-time training was not easy, but indicated a passion for the sport of which her father is fiercely proud.

“I’ll tell you how committed she is – she just got a job offer to shoot a segment for a movie, it was very lucrative for her and would have really helped her acting career, however she turned it down,” he said.

“I said to her it was her choice, ‘you figure out what you want to do but I can tell you this, you have to pick one or the other because you are not going to be able to commit 100% and that is what it is going to take to fulfil the criteria to make an Olympic team’.”

A spot on the USA Olympic team, let alone a medal in Tokyo, would, you suspect, be a dream fulfilled, not only for Ashley but also for her father. “The Olympics is the greatest event in the world as far as I am concerned,” Hill said.